The Prelims level was a tough one..The highest score was 24-25 and the cut off was 21. The teams that made it through were, 2 teams from Citibank, KPMG, NOKIA, TCS and SANMAR. But a controversy arouse after the end of the show when KPMG won. The second placed team TCS alleged that one member from KPMG did not belong to Chennai and was from Mumbai, which pissed Derek off to a big extent. The event management team is conducting their research and if proved to be so, TCS would walk away as winners, if not KPMG would make it through.
1. What is the item for which, Kalyanam Iyengar was the first person to make?
2. Who coined the term ‘mega marketing’?
3. Which governing body was established in 1992 by the Government of India to control or regulate the issue of securities, investors and market Intermediaries?
4. For BP who coined the name ‘Jyothi Amma’ a village entrepreneur who would help, sell and educate villages.
5. The Coffee board of India has a mascot. Its named Coffee-----
6. Worcestershire sauce was first made in England, but in which country did it originate from

7. In the 80’s which of the following departments were not present in a Advertising agency
a) Creative
b) Media
c) Account Planning
d) Account Servicing

8. In the novel 3 Mistakes of my life Ishan has been the best cricketer in his locality and school. He suggests the name of their business as "Team --- Cricket Shop

9. What do you get when you press Ctrl + Alt + E key in Microsoft Word?

10. Who is the highest paid model in the world?

12. According to eBay, which IPL team’s merchandise garnered maximum sales?

13. Who played a key role in forming the Swadeshi Co-operative stores?

14. Who named the Pareto Principle after the Italian economist Vilfredo Pareto?

16. A question related to the history of ESOP’s

17. American and Yankees in a single unit or multiple unit are types of?

18. Which company changed its corporate identity on the 50th year of the discovery of DNA, which also happened to be this company’s 25th anniversary?

19. Which company migrated all its servers to Linux and now currently uses more than 60 percent of its desktop with Linux?

20. In the making of which historian monument was there a barter system, whereby the workers were given 111 million jugs of beer and 126 million loaves of bread

22. A kebab variety was shown, asked to identify it – Chiro Kebab

25. A pic of the print promo of Rocket Singh

26. How many bottles of liqueur are you allowed to carry through the Indian customs?

28. Which company was credited with the ‘Word – of – foot’ movement?

29. In the song O bla di O Bla da, which is the profession indicated?

30. The Bessemer Process was used in the mass production of which metal? 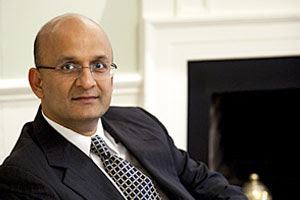 Q. Identify the gentleman of Indian Origin to lead a coveted institute?
Ans : Mr Nitibn Nohria, the tenth Dean of Harvard Business School
Posted by Udaibhan singh at 4:07 AM 3 comments: